Band Links:
Thankful for another year spent pre-gaming the holiday season with killer entertainment and our toes in the sand (check our festival preview here). This year’s Riptide Music Festival was undeniably one for the books thanks to the amazingly ambitious 104.3 The Shark team. The weekend-long festival was packed to the brim with exciting musical talent, a thrilling fashion show hosted by Queer Eye icon himself, Tan France, culinary showcases, art and activities, and delicious food and drinks aplenty. It wouldn’t be possible to express in words and photos just how exhilarating the entire weekend was, but we’re here to give you a glimpse with some highlights of Riptide Fest 2019.

First of all, there is nothing to complain about regarding the festival’s location. Fort Lauderdale Beach is the perfect spot for this two-stage festival, and parking was surprisingly not the worst for such a populated area. Everything food-related is lined up right by the gates in marketplace-style aisles, leading up to the entrances to the Sharkwrecked Main Stage and Underground Lauderdale Stage. Making your way towards the water, you’ll hit the vibrant Underground Village, filled with colorful installations, themed activations, drink and art vendors, and bars and lounges to keep you cool from the burning Floridian sun.

Since we mentioned it, here is the music video for The Killers’s “For Reasons Unknown:”


Naturally, the musical entertainment is what the Riptide Fest curators really put their all into, and it shows. The most notable “opening” act of Day 1 was The Band CAMINO, as they were the first set of the day to have a packed out crowd and the strongest sing-alongs. The band was engaging, energetic, and musically on-par. From that point on, the stages bounced back and forth with the hottest alternative artists such as Silversun Pickups, k.flay, and The 1975 just to name our favourites of the day. However, it was The Killers who absolutely stole the show (as expected) and closed out Day 1 in the best way. They certainly know how to put on a timelessly captivating show, and they even brought a young fan on stage to play drums for them during “For Reasons Unknown.”

Although the first day of the festival really set the bar high, Day Two followed suit despite the weather conditions and scheduling mishaps. Unfortunately, New Politics was forced to drop the festival last minute, but hometown hero Alex DiLeo stepped up to fill in the gap with this swoon-worthy acoustic set. We would have to honour I Don’t Know How But They Found Me with the award for greatest fan commitment and engagement of the day. The front row was lined with highly devoted fans anxiously awaiting their set, which got pushed back due to the changing schedule. They sat through the rain to see their favourites, and they relayed the energy tenfold throughout their entire set. The crowd-to-stage connection was the strongest we’d seen the entire weekend. 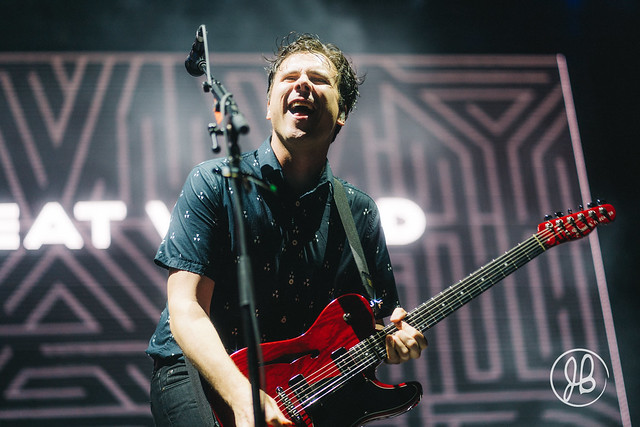 There were plenty of noteworthy sets of Day Two as well. Whether it was the somber and sweet Meg Meyers, the passionately erratic Barns Courtney, or the nostalgic kings of rock Switchfoot, there was not a single artist that didn’t play their hearts out. However, it wasn’t until the sun finally set did things really kick into gear. Catfish and the Bottlemen and headliner Jimmy Eat World had the entire festival at their feet, whether the fans were cramming to get close to the barricade or simply dancing at their leisure sprawled out across the sands. Even when the rain made its way back and heavier than earlier, Jimmy Eat World played straight through the Florida downpour and fans sang like choirs to the band’s greatest hits, ultimately unfazed by the glittering sky.

As they say, all good things must come to an end. This year’s Riptide Festival weekend felt far too short, but we know we can anticipate many more years of this impressive festival in the future. We applaud 104.3 The Shark for their intense preparation in making one of the strongest festivals we’ve attended this year, and for working hard to create a safe and welcoming community for all to enjoy.

Check out the latest music video from Jimmy Eat World for the song “555:”


See what you could have experienced with the official tour poster for Riptide Festival 2019: