Band Links:
On an intellectual level, metal festivals are a pretty dismal affair: crowded, noisy, sweaty and overpriced. Emotionally, however, their allure stands in total opposition to this: the heart wants warm beer, the press of unwashed humanity, questionable merchandise and sub-par sound quality even when the head is practically screaming at it to turn and run. That said, these festivals are by and large becoming less about the musical aspect and more of a social event – a place to meet old friends, to have a few drinks, a few laughs and, maybe, if time allows, to catch a gig or two.

The sheer scale of Europe’s summer mega-festivals (like Wacken and Hellfest) make seeing all the bands an impossibility purely from a logistical point of view: multiple stages, overlapping time slots and sheer distance preclude this from being in the capacity of even the most dedicated and intrepid festivalgoer.

Even at smaller festivals, there’s a very good chance the line-up won’t cater for niche tastes and warrant a front-and-center presence for every single act, never mind needing to occasionally eat, drink or otherwise attend to human needs. Factor in the vast array of non-musical activities most festivals now offer – art and culture panels at Nove Kolo Metal East or Midgardsblot, outdoor games and sports at Metaldays or Kilkim Žaibu or even the casinos and pools of 70,000 Tons of Metal – and simply watching bands play rapidly loses its allure as the primary reason to attend.

Panzerfaust performing “The Day After Trinity” live at Throne Fest:


And this is why Throne Fest, held at Kubox in Kuurne, Belgium over 8 and 9 June, is such an anomaly for me. An indoor festival, in a small town, with no additional activities – and, as always, an absolutely stellar line-up of black metal artists. People attend to socialize and drink, yes, but the raison d’être behind Throne Fest is live black metal, pure and simple. And it isn’t just just up-and-coming or smaller acts: 2019’s headliners included the likes of Enthroned (with whom we previously chatted about the festival), Watain, Taake, Shining and, most surprisingly, considering their usual cross-genre appeal and popularity, Satyricon.

And while the beer still isn’t particularly cheap, at least it’s cold and not the only beverage available; although the coffee stand didn’t quite prepare for the warm drinks desire engendered by Saturday’s inclement weather and by Sunday were serving the tiniest cups imaginable… The merchandise stands, too, are fairly priced and stock a wide range: from patches and pins to vinyl to clothing – not to mention the presence of underground labels making hard-to-find items just a little more accessible.

Some live shots thanks to Dayv Oblyvyon; images as dark as the music itself: 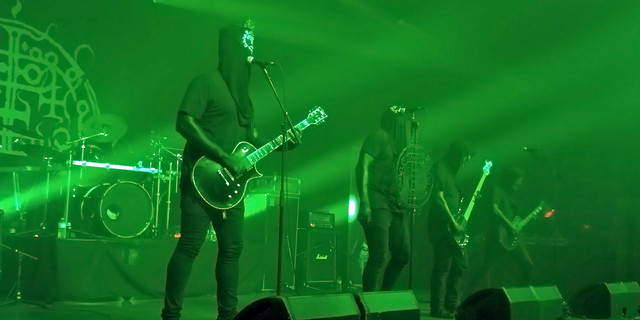 And as for the music itself… The indoor venue makes sound quality a far more achievable goal and the existing stage allows for a far easier setup and soundchecking process. Taking all this into account, even though Throne Fest’s organisers may not invite or encourage media attention, they most definitely deserve it.

Standout moments on Saturday included (among others) Portugal’s Gaerea: not only is their musical presence raw and authentic, but their over-the-top anonymity, down to blacked-out arms and full-face masks reinforces the impression that their music is what matters, not them as individuals. This trend may have started with the likes of Mgła, but it is a very effective evolution on the corpsepaint theme. Almyrkvi and Svartidauði (read our review of Revelations of the Red Sword here) from Iceland both put on energetic shows, but I sadly missed France’s Seth playing their 1998 album, Les blessures de l'âme, in full. People got hurt during Impaled Nazarene’s impassioned (albeit slightly drunken) set, but the big ticket was Enthroned launching their new album, Cold Black Suns (read our album review here), to a “home” crowd. Even Watain’s ritualistic setpiece afterwards was visually enthralling, but lacked the musical heft that Enthroned brought to the stage.

The Committee live at Throne Fest:


Sunday, however, was a game changer. Canada’s Panzerfaust were the surprise of the weekend: although I had been enjoying their new album, The Suns of Perdition 1: War, Horrid War (read our album review right here), for some time beforehand, their live show was simply spectacular. Following that, The Committee were their usual excellent, tight selves: witnessing Marc Arbre’s bass work in particular is always a jaw-dropping experience.

I took a short break over Varathron’s set, catching the last thrashy numbers just before Portland’s Uada took the stage for yet another flawless set: their live renditions of studio recordings are masterful. While I respect Niklas Kvarforth’s lengthy and valuable contributions to black metal, and DSBM in particular, Shining’s live set failed to inspire; Taake’s performance after this was far more engaging, with Hoest’s less frenetic, yet still energetic, frontman duties coming across as more convincing than that of Kvarforth.


Satyricon, however, completely shifted the bar when they closed the festival. While a fair proportion of the musicians at Throne Fest are taking the anonymity approach to heart – Gaerea, The Committee, Svartidauði, Uada – frontman Sigurd Wongraven is truly an onstage force of nature. For lack of a better term, a rock star. From the get-go, he engages and inspires the crowd, provoking the most enthused reaction I had seen all weekend. Black metal fans are famously introverted attendees at live shows, and not much in the line of headbanging or moshing happens – but Satyricon had everyone on their feet, swinging their necks, throwing up horns and screaming themselves hoarse.

A well-curated setlist, combining old favourites like “Black Crow on a Tombstone” and “Now, Diabolical” with new singles like “Deep Calleth Upon Deep” and “To Your Brethren in the Dark” was extremely well received – and I do believe its reception was enjoyed by the band too, as Wongraven remarked upon the sense of history, of “playing small shows in sweaty clubs… just how they like it.” Seeing Frost in action behind the kit was also unforgettable: the man is a living metronome, never losing time despite his constant headbanging and seemingly wild flailing: his loose style of playing is totally at odds with the machine-like precision of the sound he generates.

Overall, Throne Fest was an incredible experience. I may be getting too old to have the stamina to watch every single band in its entirety, but coming from a developing country, where live music of this caliber is an absolute rarity, I make it a personal goal to experience as much of it as possible. As a consequence, I left Belgium on a Monday morning tired and in pain, but extremely satisfied and eagerly anticipating 2020.

Check out the official poster for Throne Fest, which took place on June 8th and 9th in Kuurne, Belgium.