Band Links:
For the seventh year, the Monster Energy Aftershock festival came to Sacramento, California’s Discovery Park on October 13th and 14th. Weekend passes and single day tickets completely sold out, bringing 60,000 people together for Aftershock’s largest year yet! With such a successful event in 2018, we’re sure to see more exciting tours take aim at Sacramento as a go-to stop to perform.

From rock to metal, the annual festival brought something for everyone by including together a variety of artists. Sevendust, Incubus, Shinedown, Seether, Godsmack, The Fever 333, Jonathan Davis’ side project outside of Korn, and many more took to the three stages spread throughout the festival grounds before Sacramento’s own Deftones and Grammy-winning, System Of A Down headlined at night.

Needless to say, with so much going down and so many performances to soak up, there were countless magic moments during the two-day extravaganza. As we do, though, we’ve distilled things down to what we consider to be five (5) of the TOP moments that Aftershock dished out.

Just how monstrous was the 60k-strong crowd? Check this out...

- Vocalist Serj Tankian came out onto the stage with a giant grin on his face and seemed truly excited to be there. Adding System Of A Down to this year’s bill to close out the festival on Sunday night was extra exciting because the band had not played any shows in the US since 2015. The stop in Sacramento was part of a short five-show tour that graced the west coast, so it felt extra special to be able to be part of the experience.

To security’s dismay, a handful of people climbed trees in an attempt to get a better view by rising above the enormous sea of people that flooded the grounds in front of the Monster Energy stage. The crowd’s energy was tremendous and I don’t think I’ve ever seen such massive, consistent waves of crowd surfers come forward at the very start of a set. Audibly and visually SOAD put on a fantastic performance from the first note to the last.

Sift through Catherine Patchell’s killer gallery of live shots from the festival. 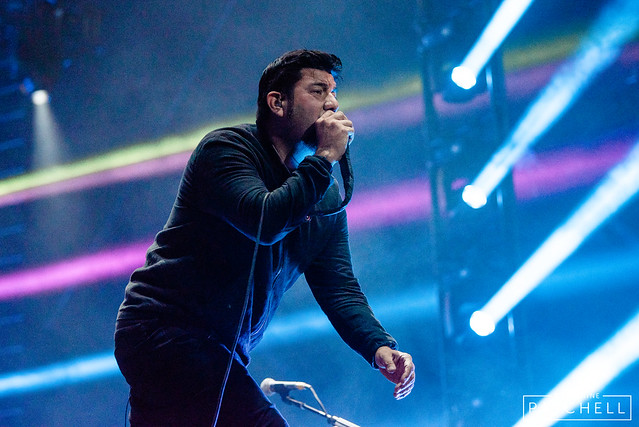 - Earlier this summer, an unfortunate run-in with stage equipment caused Underoath vocalist, Spencer Chamberlain, to leave Riot Fest with a broken foot. Though this could have led to a Dave-Grohl-style seated performance, it was exciting that Aftershock marked Chamberlain being cast free while also being Underoath’s first time making an appearance at the festival.

They’ve kept busy since the release of their album Erase Me in April, including a number of major festivals throughout the summer in both the US abroad. Underoath does a great job catering to both new and old fans - bringing out a setlist that flows while highlighting their newer sound amongst the songs that you know everyone always wants to hear. Haven’t had a chance to hear any of their new songs yet? Go check out their next tour which kicks off at the beginning of November.

Underoath have a simple message about the world at large.... “ihateit”.

- Though Deftones were not new to taking to the stage at Aftershock, this year marked their first time headlining the festival in their hometown. From Meltdown Festival in England to Hellfest in France to Copenhell in Denmark, Deftones made a number of appearances at major festivals this summer. It was fitting that to end the summer, they came back to their hometown to close out Saturday’s sold out event.

Music brings people together and Deftones performance was a testament to that. After the first few songs, vocalist Chino Moreno took a moment to wave and say hello to his friends and family that lined the sides of the stage during the performance. Any time I’ve seen artists perform in their home turf, there is always something special about it and there is an extra spark in the show. It was a performance to remember and I’m sure we’ll see them back on the bill in the future.

An official Deftones clip of them performing “Be Quiet and Drive (Far Away)” live.

- The Fever 333 have continued to generate a lot of buzz throughout the festivals they have been making appearances at this summer, so it’s no surprise to see that even on smaller stages, people are showing up in large numbers. With all that’s going on in the world and specifically in the US, it’s wonderful to witness musicians using their platform to bring light to issues and unite people.

The Fever 333 has a lot to say during their high energy performance, offering a progressive safe space where everyone is welcome. The energy between the three-piece and the crowd is unparalleled - drawing an audience that is both ready to go wild to get stuff off their chest while being respectful and watching each other’s back.

Have you ever tried “Walking in My Shoes”? Do it now!

- I had never seen At The Drive In before but quickly learned that they deliver a high energy set that you truly have to keep your eyes open for. Aftershock’s three stages were all separated by sections of trees which did a nice job helping to isolate the sound from one stage to another. After the first couple songs, I moved from being in the front of the set to a spot off on the side in the shade. Suddenly, out of the corner of my eye, I watched a large branch crash to the ground. A couple minutes later, a second, larger branch came down right on of it.

In the second song, vocalist Cedric Bixler-Zavala almost dropped his mic stand off of the stage. For a moment that felt like forever, we slowly watched the mic stand begin to lose balance and topple forward - but just in the nick of time, he caught it and brought it back to standing. Dawning a big smile, he commented that he got us. I can imagine the looks of faces all of us in the photo pit were comical. Later in the set, Bixler-Zavala leaned over, gripped the mic stand with his teeth and proceeded to lift it into the air and swing it around as it remained in his mouth. I was both intrigued and mortified, hoping that the stunt wasn’t going to lead to an expensive dentist visit. At The Drive In delivered a set that was far from what I expected and it was fantastic.

Miss the event and want to now how badly you messed up? Here’s the full main line-up to remind you.